SML – And then there was brunch…

and 29 leathermen gathered at the Encore Restaurant for Brunch as part of the 30th Birthday Celebration for Jeff Henness. Many of them, were joined by the hot stud they had taken home the night before. Everyone gathered around a series of tables joined together as one. Everyone introduced themselves and enjoyed talking to each other and sharing stories. And so it began…

How did we get to this point?

The end of his twenties, life was not going well for Jeff Henness. In December 88, he had publicly ended an 18 month relationship with his collared boy (JP) who was using drugs and had become abusive. In January, Jeff traveled to Portland to DM at a Play Party on Friday which was the birth of O.R.G.A.S.M. (Oregon Guild of S/M Activists) Saturday was the Portland Leather Contest. On Sunday, while at CC Slaughters on Stark Street, someone broke into the truck and stole all his leathers as well that of Rick Orr (Puget Sound Mr. Leather 89). The only item left behind was Jeff’s cover which had fallen to the cab floor. February saw the assault of Jeff by JP outside Hombres (now Diesel). March dawned with Jeff feeling unsafe and insecure, really missing his second skin. 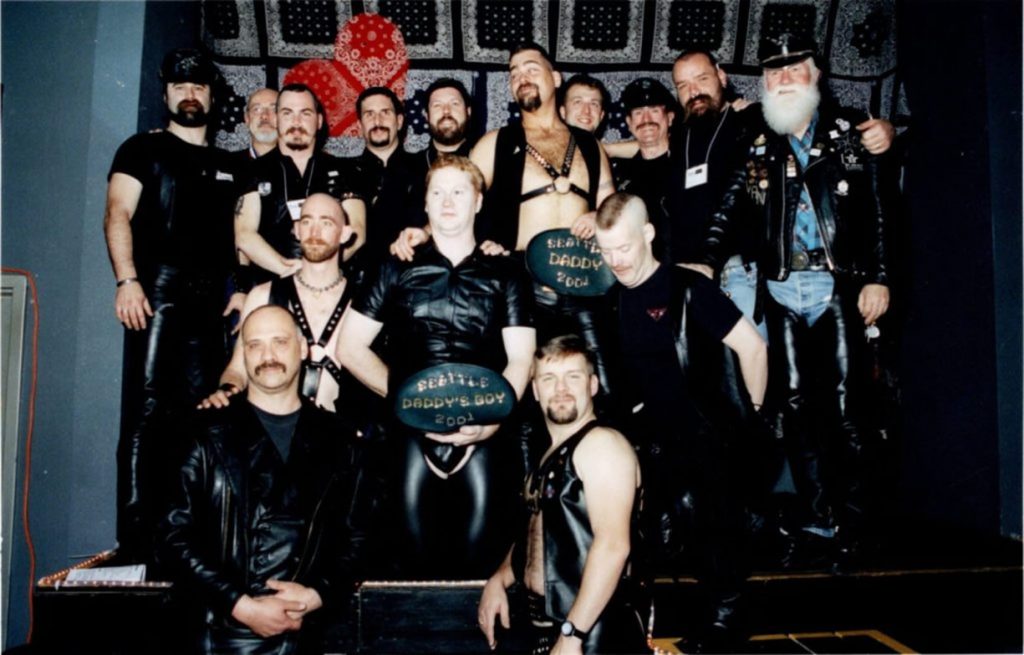 Nine of the men that Jeff had met in Portland

traveled up to Seattle to help Jeff celebrate his 30th Birthday. Four of those Portland studs ended up in his apartment building (Oink!) with Dale Trotter being his birthday gift from Rick Orr who lived downstairs. Jeff wanted a chance to gather everyone up at the end of the weekend so he posted a notice on the bulletin board at The Eagle and the word was spread. Sunday morning saw nine men stumble out of his apartment uilding and head off to the Encore for Brunch. Everyone valued being able to hear each other talk at the Brunch – yes, the Eagle was just as loud then as it can be today.

It was decided to gather again

on April 12th following the Washington State Mr. Leather Contest. Then at the May Brunch, we started discussing what to name our little group. My favorite was “Pigs on Pike” but we settled on Seattle Men in Leather. We decided that we wanted to become a Leather Fellowship and not a Backpatch Club. Jeff Henness and Wes Randall were selected as Co-Facilitators. Rick Orr started work on developing the club logo working on a Macintosh at Kinkos. Jeff started work on By-laws which the club approved in August at which time Jeff was selected as President. October saw the first SML newsletter edited by Cort Odekirk (on an Apple 2PC). SML sponsored the Washington State Drummer Contest in July and the Seattle Daddy & Daddy’s Boy Contest in October – both held at The Seattle Eagle. December saw our first Holiday Party and we celebrated our 1st Anniversary with a special private dinner at Stravinsky’s in March 1990.

was called “Equinox” symbolizing the renewal of life and the club. In 1991, Equinox II became our run weekend. Equinox II in 1991 and Equinox III in 1992 were held at Pilgrim Firs Camp near Port Orchard. Guy Baldwin was our Keynote Speaker at the Formal Dinner at Equinox III. The Knights hosted cocktail parties at both events as SML had hosted cocktail parties at the KOM Kampouts. Both Equinox Runs were chaired by Roger Axline who was then elected SML President at Equinox III. It was decided to switch Equinox to the fall equinox in pursuit of better weather rather than the cold spring and conflicts with the Easter Calendar and church camps. Sadly, Equinox IV did not happen for another dozen years when SML rented a jewish camp near Olympia. It was a successful well attended run weekend with cocktail parties hosted by the Knights and the Kansas City Pioneers (Stan Shimkus and Keith Lenz had moved to KC and joined the Kansas City Pioneers and brought fellow Pioneer Shane with them to Equinox IV). The camp did not invite us back. We rented another camp at the base of Mt. Rainier who canceled our event two months before Equinox V which was changed to an “in town Run”. Interesting side note, that camp was later sold due to “financial issues” – karma? Equinox then moved to The Longhouse near Redmond for the next few years. SML hosted cocktail parties at two Kansas City Pioneer Runs and brought home run awards. SML also was represented at one of Nashville Conductor run bringing home awards as well. SML hosted more cocktail parties for the Knights at Kampout and has hosted Saturday Lunch for Sea-Pah’s Kamp K-9 Run. Weekend.

in June of 1989. For years, there was some concern that it resembled the logo for Image Leather in SF. After a decade of that logo, the Steering Committee decided to ask the membership to submit new logo designs in a logo contest. With several designs submitted, the membership selected the one created by Terry Sutherland with model – Eric Bonesteel as the club’s new logo. It is still used today. The Black Felt SML Banner was a logo designed by Billy Jefferson and constructed by Andy Gray in 1991. The Studded Leather SML Banner was constructed by O’Rion Xcalibur in 2012. 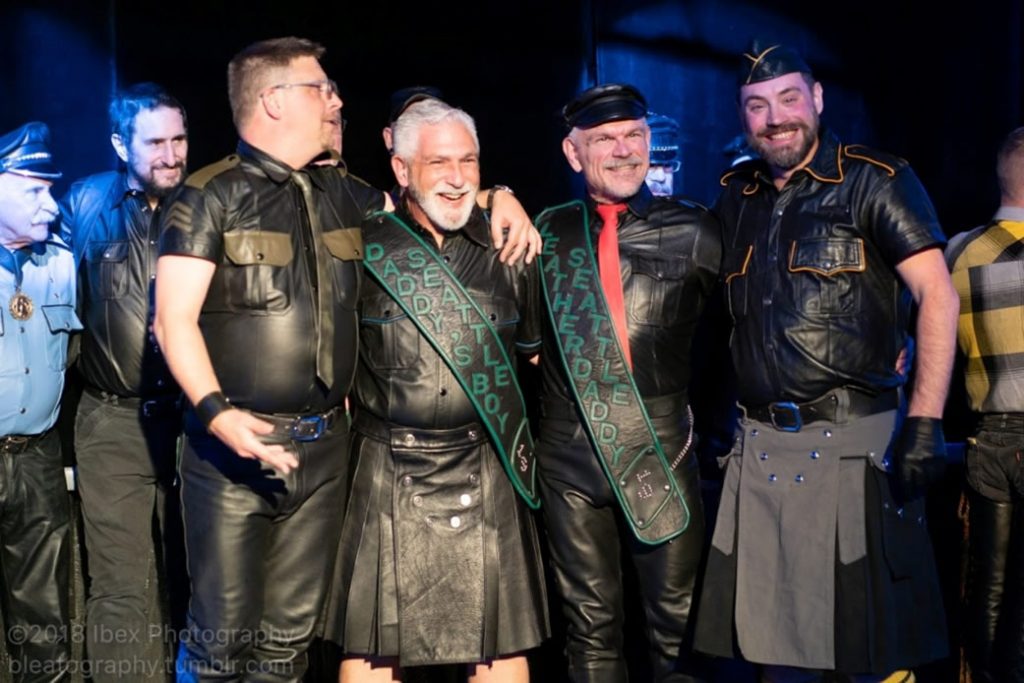 It is noted in the club archives that in September of 1992,

Sheldon Jacobs first raised the issue of a backpatch for club members. The issue of the need for and how to qualify for a backpatch was debated for several years. Also raised was a desire for sponsorship or pledging membership which was debated but defeated as the membership did not feel that it fit our mission statement of a leather fellowship. After MUCH discussion, strict guidelines were adopted for the Club Backpatch which was designed by Jim Drew. A member had to attend 18 club events within an two year period. Over time, adjustments have been made to those guidelines.

The membership approved our first set of by-laws in August of 1989.

at the urging of Alan Selby – the “S” of Mr. S Leathers and the first SF Leather Daddy. It was held Columbus Day Weekend 1989 at The Eagle. with three contestants for Daddy and two for Boy. Dave Lewis was selected as Seattle Leather Daddy 1990 and Cort Odekirk was Seattle Daddy’s Boy 1990. The contest that was held on Columbus Day weekend in 2018 selected our 30th set of titleholders. In 1994, SML added the Seattle Leather Grand Dad title to the mix which has since been retired.

Another 3o year tradition is the club Holiday Party.

Our first one was hosted by Absolutely Nobody. That’s right! David Powers had legally changed his name to Absolutely Nobody. He then ran for WA Secretary of State. Our first couple of Holiday Parties were over night events. For our second one, we rented a Hotel Suite with electrical demos, zippers and wax play by George Nelson from the Seattle Dungeon Guild. 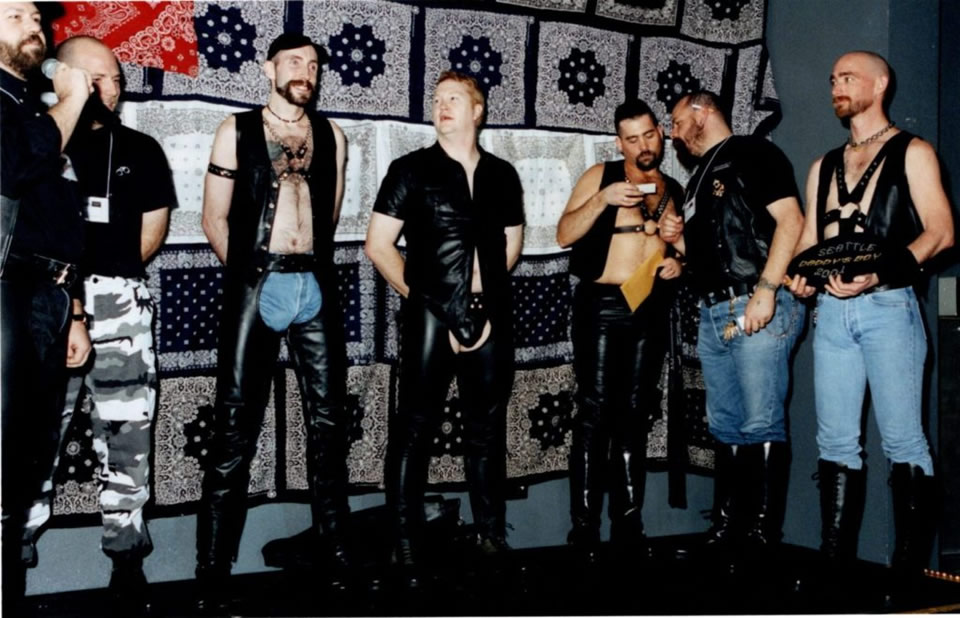 The Father’s Day Chili Feed was started in 1991

by Seattle Leather Daddy 1991 Nile Baird and continues to this day. Boots and Buzzcuts was started in 1996 by Seattle Daddy’s Boy 1996 Dan “Puppy” Daniels and Paul Best as Uniforms, Boots & Buzzcuts held on Armed Forces Day in May and Veteran’s Day in November at the Cuff. Picture’s with Santa was the brainchild of Seattle Leather Daddy 1996 Eric Bonesteel and Seattle Daddy’s Boy 1996 Dan “Puppy” Daniels in December of 1995. Rudolph (Eric Bonesteel and Larry Ryan) always managed to get laid… Over the years, these three events have raised many thousands of dollars for such charities as Lambert House Youth Center and Seattle AIDS Support Group, The Leather Archives and Museum and others.

at The Encore Restaurant (now QueerBar). When the Encore closed, we started doing SML Brunch at Spags Tavern (now Unicorn). Brunch then moved to the Cuff (front bar). Teams of members would volunteer to prepare the brunch at their home and bring it  in to the bar. Brunch was served on the covered Pool Table. When the Cuff expanded and opened the Cuff Dance Bar, Brunch was moved downstairs and catered by the Cuff Kitchen Restaurant. After the Cuff Kitchen closed, CC’s on Madison catered SML Bunch at the Cuff. Later the Brunch moved to Guppies in West Seattle then moved to the new CC’s and more recently was held at the Comet Tavern and Purr Montlake.

The creation of a Doghouse