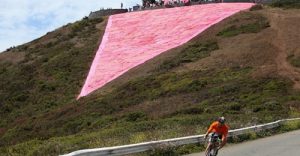 Homosexuals by the tens of thousands (who wore a pink triangle patch) along with Roma (Gypsies), THE DISABLED, Poles, Jews (wore a Star of David patch), Russian POW’s, political dissidents and research continues to uncover the extent of other nationalities who were interred in concentration camps where the vast majority died in the gas chambers or worked to death and starved. THIS is the origin of the pink triangle as a symbol. Gay Pride is mostly celebrated in the month of June throughout the world. June 28,1969 marked what today is referred to as The Stonewall Riots in New York City. Yet one more brutal police raid of a gay bar called the Stonewall Inn became one of the primary FLASHing points for the LGBTQi (Lesbian, Gay, Bi-sexual, Transgender, Queer and Gender identity) Movement we know today. Those “Queens” had had enough!!! Some of the feistiest were men in dresses (BTW you don’t pull the wig off a drag queen.) and other parts of our “Tras” community. The bar was mostly frequented by gay men who began with throwing bottles in the struggle against police oppression, spilled into the streets and marked nearly 4 days of rioting which included city hall, the burning of police vehicles and just enough mayhem to start a movement. As a young boy and man living in Illinois, I didn’t know much about my own history as a Gay Man. Back in the 60’s when I was born gay was portrayed mostly as men in dresses if at all in the media, so I didn’t have a sense of who I was. Once I got to Seattle much more was revealed. Duh! Who knew I was Gay? I quickly identified with my own machismo. This was not as an affront to men in dresses but to claim my own sense of self. I’m a proud Leatherman. ENTER LEATHER stage leftest leaning “pinko” (A slang term who’s origins are in part from both the pink triangle of the Nazi concentration camps and the McCarthy Era in our own country). At times the lack of reference to such in my on-line profile has been a personal struggle. Born much of my family’s acceptance and my career in that time of my personal history, I have persisted to leave these chapters absent from my story. Well I’m not getting any younger (49 in one profile, 57 in another, but I’m actually 59. My bad. I tell folk I just forgot to up-date these few sites. HA!). Though my leather wardrobe has shrunk by necessity (Q: Who can lug three or four steamer trunks full of dead cow hide on any given move? A: A much younger man.), I carry the heart of a Leatherman in my chest, the masculinity and the mystery. So if you happen across new posts just be aware or be afraid, be very afraid if you must. It is with this PRIDE that I note in many, many places where we typically have a Gay Pride Parade, this year these dates in cities have become “Black Lives Matter Marches.” Almost culturally brown and black are being added to the Rainbow Flag, long having been a proud symbol of the modern LGBTQi  Movement. I’m so PROUD OF THIS AND PROUD TO BE AN OPENLY GAY LEATHERMAN IN SOLIDARITY WITH THE BLACK LIVES MATTER MOVEMENT!!! (Link to events prior to Stonewall which also set the stage for the LGBTQi Movement: https://www.newsweek.com/before-stonewall-riots-1445365